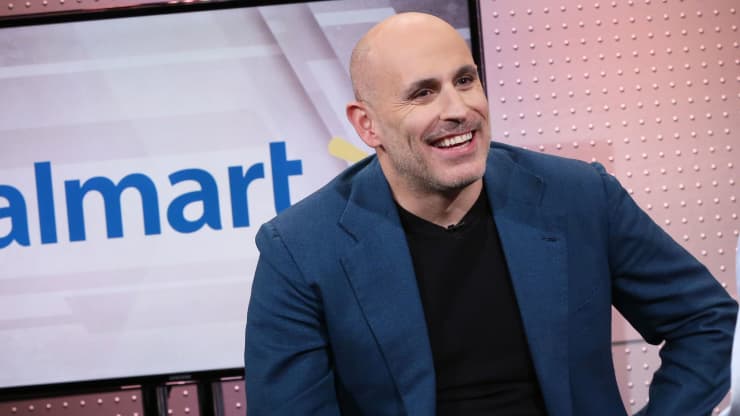 Lore joined the company in 2016 when Walmart acquired Jet.com, the start-up that he co-founded, for $3.3 billion. The delivery service shipped groceries and other household items to largely younger, city-dwelling customers.

With the pricey acquisition, the legacy brick-and-mortar retailer and its CEO, Doug McMillon, made a big bet to jump-start its digital business and play catch-up to Amazon. The deal was seen by investors and analysts as a way for Walmart to gain the digital savvy of Lore and his team. He had deep experience in e-commerce. He also had insights into its fast-growing rival after selling his former company, Quidsi, the parent of Diapers.com, to Amazon for about $550 million. He worked for Amazon for several years before starting Jet.com.

Lore notified the company on Thursday that he would retire from his position at the end of January, according to a Walmart financial filing on Friday. He will serve as a strategic advisor to Walmart through September, the company said.

In an interview with CNBC, Lore, now 49, said he and Walmart agreed as part of the acquisition that he would stay for five years and help integrate the companies’ brick-and-mortar and e-commerce businesses. It has already combined those teams, running ahead of schedule, Lore said.

“We just kind of got there earlier than we expected,” he said.

Changing the narrative on Walmart
Lore said the Jet.com acquisition changed the narrative about Walmart. He said more people started to see it “as a formidable force in e-commerce and technology,” which allowed the company to recruit and hire top talent.

With that team, he said the retail behemoth learned to move more nimbly to keep up in a digital world — a mindset that’s helped it adjust and open pop-up fulfillment centers as the pandemic led to a spike in online demand.

McMillon credited Lore for the pace of the retailer’s e-commerce growth in a companywide email Friday. He said Lore spearheaded the redesign of the company’s website and app, transformed its supply chain to allow for two-day and same-day delivery and expanded the assortment of goods it sells online.

“Marc’s leadership helped ensure we were positioned to respond to the demand driven by the pandemic this year,” McMillon said. “All of this progress is the result of good work from a lot of people, of course, but Marc’s expertise and aggressiveness have been game changing. We have learned a lot from him. I have personally learned a lot from him.”

Since the acquisition of Jet.com, Walmart’s U.S. e-commerce business has grown dramatically — even prior to the pandemic. The company reported online sales growth of 37% in the U.S. in 2019, topping its own internal growth target of 35%. That’s jumped even more as customers limit trips to the store and use curbside pickup during the global health crisis.

Walmart shares have nearly doubled in price since the day it announced plans to buy Jet.com. That’s outpaced the 73% growth of the S&P 500 during that same time.

The retailer is still trying to crack another goal, however: Turning its e-commerce business into a profitable one.

Lore declined to share a timetable for profitability. He said Walmart has made progress as it cuts losses in some areas and steps up its focus on revenue drivers, such as a broader assortment of general merchandise, advertising, its online marketplace and its expansion into financial services.

Walmart has acquired other digitally native brands, including menswear company Bonobos and plus-size women’s brand Eloquii, and launched others, such as mattress brand Allswell.

And it’s added more online options for customers, from curbside pickup to Walmart Express Delivery, which can drop off purchases to customers’ doors in two hours or less. It also partnered with Shopify to expand its online marketplace and struck a deal with secondhand seller ThredUp to sell more brands of apparel, shoes and accessories.

Yet some of the initiatives led by Lore faded or failed. Jet.com — the start-up that originally caught Walmart’s attention — was officially wound down in the spring. Jetblack, a membership-based service that allowed customers to order items on demand by sending a text message, became a money-loser that was discontinued before it was scaled.

Lore said Jet.com “served its purpose” by giving Walmart a wave of new talent and technology. He said even efforts that flopped helped the company gain new insights about what customers want.

“We tried a lot of things,” he said. “We innovated. Not all of them are going to work. We learned from our failures.”

Returning to his roots
Lore said he will return to his start-up roots by launching new companies and advising others. He plans to write a book about his life and career, work on a reality TV show and get involved with more philanthropy.

“I’m not going to be sitting still, that’s for sure,” he said.

He declined to share details about one of his next entrepreneurial efforts, saying it’s in the early stages, but said it will be building a “city of the future” with a higher quality of life.

“There’s an opportunity here to test a new model for society, and just like in typical start-up fashion, doing it on a clean slate is the easiest way I know how to do it,” he said. “Trying to make change in the country as it exists today would be much tougher.”

And he said he will continue to advise Walmart, as long as its executives call.

“All the things that Doug said about empowering and trusting me and the team when we did the acquisition — he made good on everything he said and more,” he said. “I really, really enjoyed the experience. I learned a lot, and I’m grateful and will be a supporter of Walmart for as long as I’m able — beyond my contract, beyond the strategic role.”

More store closings in 2021? These are the most vulnerable major retailers of 2021 as pandemic continues

More store closings in 2021? These are the most vulnerable major retailers of 2021 as pandemic continues 0

As vaccine misinformation has prompted some to say they will refuse to be inoculated against the coronavirus, the world’s largest online retailer rema [...]
Leer más...
© 2021 TodoRetail. All rights reserved.